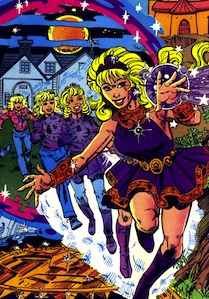 Over the last ten years, the Five Earths Project has taken on a multitude of DC Comics characters, such as the JSA, the JLA, Superman, and Batman, as well as several original characters or those based on older characters. But as longtime prolific fanfic writer Libbylawrence proves, there are classic comic-book characters that have still not received the Five Earths treatment. Not the least of those is a series considered by many to be one of DC Comics’ greatest fantasy series. No, we’re not talking about Warlord. It’s Amethyst, Princess of Gemworld, a character that shone brightly in her original 12-issue limited series in the early 1980s, which was written by Dan Mishkin and Gary Cohn and drawn by the incomparable Ernie Colon. This was followed up by a decent ongoing series that was good but lacked the focus of the original series. Unfortunately, after the Crisis, the character was altered drastically by new writers, and her story came to a swift end involving many new elements, such as the Lords of Order and Chaos, which we feel detracted from the charm of the original series. Rather than rehash the darkness of those later issues, we at the Five Earths Project like to take a character like this out of the shadows and back to her roots.

In June, 2010, Libbylawrence began an aptly named new story called “Out of the Shadows,” which stars Amethyst, Princess of Gemworld, in the character’s first Five Earths Projects appearance. In Amethyst #13 (February, 1986) a blinded Princess Amethyst is told by Doctor Fate that she is a daughter of Lords of Order and quite possibly the most powerful being alive. But is this the entire truth? Libbylawrence has just completed a story in which our princess recovers from this trauma only to learn of a real threat to Gemworld. Here’s a short excerpt from the first part.

There was darkness! In every direction, all she could see was total darkness. She was Amethyst, Princess of Gemworld, and she was also thirteen-year-old Amy Winston of Hudson, New York, but her identity at the moment was being defined not by who she was but by what she felt. What the beautiful blonde in the purple tunic and skirt felt was fear, loss, and — above all else — an awareness of darkness. She could not see! She was blind! The darkness stretched all around her like a vast void. She could reach out with her hands and find nothing to offer her comfort or assurance that she had not somehow been irrevocably separated from anything or anyone she had ever known. There was simply a terrible emptiness… and yet she also felt the exact opposite was true. She was not in a void but she was being smothered by a heavy darkness that would drown her if she could not find some way to break free from the moist and smothering shadows into the light.

“It’s not supposed to be like this!” she whispered as she sank to her knees once more and fought her fears.

Gemworld! It had not been a terrible prison of inky blackness before where her options were limited and her very existence felt threatened. Gemworld had offered terror and danger, but it had also gifted her with romance, magic, and the wonderful, thrilling sensation that anything was possible and that she, as the beloved Princess of Gemworld, could be the agent that would defy the odds to make anything possible.

Read the rest of this story at the Earth-1 After the Crisis group to find out what happens next.

UPDATE (July 14, 2010): You can now read the full text of this story here at this website. Click the following link to read “Amethyst, Princess of Gemworld: Out of the Shadows,” by Libbylawrence.