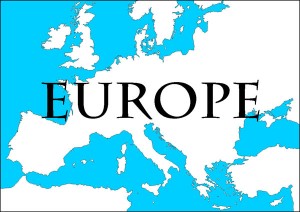 What do you do with a whole bunch of stories and story fragments that don’t fit into the continuity of the fictional world you’ve created? Why, you string all of them together into one massive story that eventually dovetails into a coherent ending, of course!

At least that’s what I did when trying to find a way to use much of the fiction written for the Earth-4 Starting Over group in its early days that were no longer within continuity. Much of this story was written as fragments of other stories ten years ago, around 2000 to 2001. I’ve rewritten all of these story fragments as well as written a lot of new content to create a story that is loosely tied together in its first half.

Deus Ex Astra, Book 1 deals with the debut of several new European action-heroes, and Book 2 (not yet published anywhere) will show how they come together as one team.

The heroes in this story may or may not seem familiar to you, depending on how familiar you are with the golden age Fox Feature Syndicate comic-book characters who inspired many of them. Yes, these are a few of the most obscure characters you’ll find at the Five Earths Project, but I’m hoping you’ll find them interesting enough to read this story, anyway.

The Crisis on Infinite Earths is over, but a new crisis of mythological proportions has begun all across Europe. Has a new heroic age struck the continent? The strange and powerful alien being known as the Super-Wizard believes it has, and he begins watching as a new breed of European action-heroes debut, taking steps to nudge a few in the right direction. Who is the mysterious Black Lion of Scotland, and what demons drive him on to act as a vigilante? Will Dr. Lorenzo Puzzini’s desire to continue his uncle’s heroic legacy as the new Dart of Italy make up for his father’s crimes as the villainous Barbarik? How will Lucille Michaud, the French heroine known as Psyché, escape from her mysterious captor? Has Jack Bicci, the former Sinistro, Boy Fiend, finally turned on his old ways and embraced the heroic destiny others predicted for him long ago? Will the power granted to Rafael Guerra make him the new hero Stardust of Spain? Will the Kenyan-born Austrian teenager Madeleine Fehr inherit the powers of her grandmother, Marga the Panther Woman, to become Panthera? Will the Swedish artist and new father Alvar Sundin be able to embrace the idea of becoming the new vessel for Thor, God of Thunder? Will Jock Gruffud make it through the night as he battles numerous mythical baddies throughout Wales and the West Midlands as the strongman wizard hero Jock o’ Kent? And what will finally bring all these new heroes together as the Paragons?